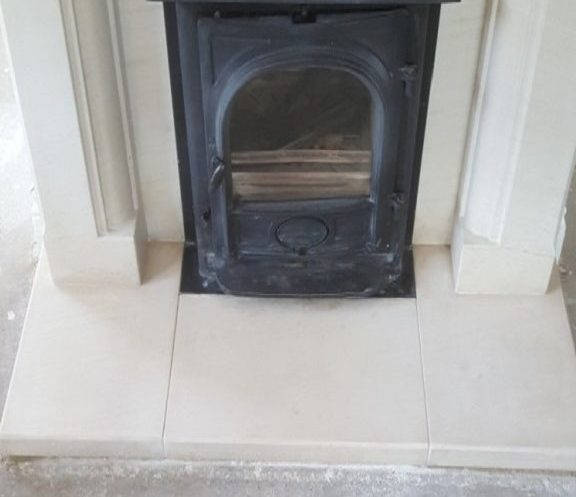 The UK has been experiencing an increasing amount of rain over the last few years and this has resulted in quite a few areas being flooded. One of those areas is the old city of Chelmsford in the middle of Essex which is prone to flooding due to the rivers Cam and Chelmer that run through the town.

I was asked to visit a property in the town that had been flooded over winter and the red dye in the carpet that was lying on the floor adjacent to their lovely Limestone Fireplace had stained the hearth in several places but primarily around the edges.

The fire place had never been sealed and because of this the stone had sucked up the flood water like a sponge. They had drying equipment installed and as the moisture evaporated the red staining became more and more evident. Since then several companies had been to try and remedy the problem and each one was unsuccessful. The couple contacted us, and we went to assess the problem fully equipped to carry out the work.

Had the Fireplace been sealed we our first task would have been to remove to ensure we would have no issues sealing the fireplace later. In this case however that wasn’t an issue, so we were able to move straight onto cleaning up the stone using a set of diamond encrusted hand-held burnishing blocks. We started with the coarsest block (50 grit) and rubbed the stone with a bit of added water as lubrication, before wet vacuuming away the excess residue. This process was then repeated with progressively finer blocks (100, 200 and 400 grit), and the hearths were given a final rinse with fresh water.

The burnishing blocks are excellent tools to remove scratches and marks from tile and stone and did a good job of removing the red dye from around the hearth. They also took care of some marks that had appeared where the owner had placed a couple of slate tiles on the flat part of the hearth.

Along with these marks were some corrosion spots where a metal ornament had been sitting on the hearth for several years. I treated these with Tile Doctor Rust Away which is a specialist product for removing rust stains from tile and stone after a few applications the stain was gone.

After we had cleaned the fireplace up to the satisfaction of the client we used a smail dryer to dry everything out so that we could finish the job and seal the fireplace the same day. Once the stone moisture levels were at the correct level the Limestone Fireplace was sealed using three coats of Tile doctor Ultra-Seal leaving twenty minutes between coats.

Ultra-Seal is a no-sheen product that impregnates the pores of the stone protecting from within without changing the look of the stone thereby leaving it with a natural appearance. I’m please to say our efforts paid off and the Limestone Fireplace and Hearth is now stain free and looking like new.